Those currently undergoing a nursing programme.

Those schooling and working Nurses outside the country. 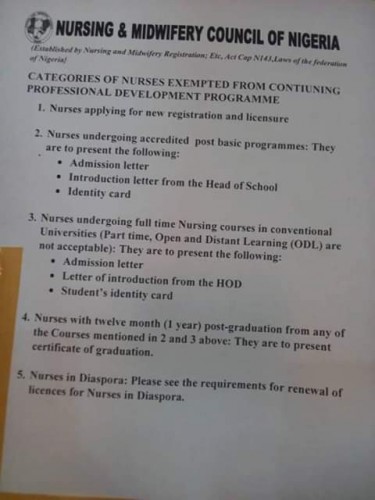 For Nurses who are currently undergoing courses such as specialties and degree (Full/part time), MCPDP IS NOT REQUIRED. Simply obtain a written letter from your head of department and a stamped photocopy of your student identity card and attached it to your documents.

Nurses who are practising outside Nigeria and wish to maintain active registration status with NMCN only need a certificate of participation in Nursing related seminar.

Make payment into the Nursing and Midwifery Council of Nigeria Treasury Single Account via REMITA.
Nigerian Nurses lighting up the world one candle at a time.
Top

Olukemi Odufoye Ademola Please is this info recent cos I learnt a circular was released last year that anyone running part time program is not exempted from MCPDP any longer.
Infact, my credentials were returned to me with a tag that i should do MCPDP after collecting my money in nursing council in 2015 despite that i attached a coverage letter from my school NOUN and i still strongly beleive that this issue is been politicised because even as at then the circular has not been released and those that submitted to nursing council with me for renewal from other schools had their license renewed while mine was returned.

In fact I even learnt that most of the conventional universities are now giving their part time students a coverage letter for full time which is been honored for renewal in nursing council till date but why are they been partial, after all everyone goes to school to update knowledge which is the essence of this so called MCPDP too, then why is it that those on part time studies cannot be exempted knowing fully well the stress of working cum studying financially and physically, THIS IS PURE IMPARTIALITY AND ITS UNFAIR, only that I can't lay my hands on it for now,I would have pasted it here.

But sincerely speaking we are yet to have leaders that have this profession at heart if not all this will not be happening,

Olukemi Odufoye Ademola
Hmmnnn, may God save us from these myopic , unreliable leaders, they were the one that kicked against nursing in open university from its onset, hindering the progress so far claiming it's not feasible,now they see it's practicality and majority are following suit, the next thing they could do is to marginalise their students from renewing their licence with coverage letter from the school, it's pure nonsense!

Return to “MCPDP for Nurses & Midwives”

Users browsing this forum: No registered users and 12 guests