Do you have a question only another nurse can handle? This is the place to post it.
Forum rules
Post Reply Previous topicNext topic
First unread post • 10 posts • Page 1 of 1

Nurses at Lagos university teaching hospital have taken to the street in protest on issues with the LUTH Management. At the protest, Comrade Awojide at approximately 11.21am declared that an industrial action commence with immediate effect in Lagos State University Teaching Hospital (LUTH).

This is coming after a Congress which was attended by nurses, SEC and SAC members within and outside the hospital to deliberate on the line of action. Comrade Awojide, the Lagos State Chairman of the National Association of Nigerian Nurses and Midwives Lagos chapter declared that an industrial action should commence immediately in order to press home the nurses demands.

The Nurses cited the following grievances with their management.

Outstanding 2015 promotion exercise result, the nurses noted that 71 Nurses were denied promotion from CONHESS 12 - 13 (ACNO - CNO) using BNSC as a criteria for promotion, claiming this negates the scheme of service for nurses in Nigeria. According to them, this decision is to stagnate Nurses on CONHESS 12 which negates the judgement of the National Industrial Court on non-skipping as conveyed by the circular with reference No HCSF/EPO/EIR/637551/TI/192 dated 4th November 2013.

Other issues cited include:
Change of LUTH Nurses nomenclature: Nurses with BNSC Nursing were promoted from CONHESS 12 - 13 and designated as Assistant director in Nursing service (ADNS) instead of ChieF Nursing Officer (CNO), Which is contradictory to what was done in other Federal Health Institutions in Nigeria.
[/i][/b] 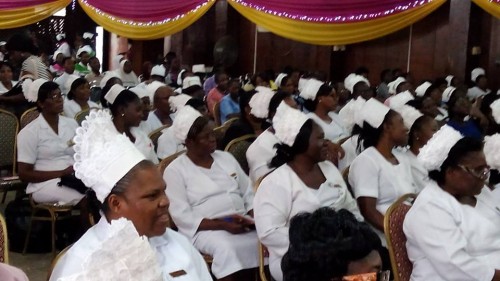 It is long overdue! Injury to one injury to all.
Top

The nurses and midwives under the aegis of the National Association of Nigerian Nurses and Midwives (NANNM) are protesting what they called stagnation, non-payment of salary and inadequate facilities.

“We have been having series of problems with LUTH management for a while now which we have made effort to resolve but all to no avail,” said Olurotimi Awojide, the State Chairman of NANNM, told newsmen in Lagos.

“We have written several letters to them on pressing issues, they are not responding and that is why we are taking this action.

“For quite some time now, nurses work at night without light, leaving them with no choice of using torchlight and phones to attend to patients.

“This is a teaching hospital and infection control should be our priority and when there are no consumables, water, people improvise to attend to patients,” he said.
Top

The Chairman of NANNM, LUTH chapter, Mrs. Oluyemisi Adelaja, said inadequate equipment had affected the nurses’ care for patients in the hospital.

Adelaja said the strike was meant to call on the management and the Federal Ministry of Health to apply the same measures in LUTH as being done in other 52 federal health institutions.

“We want them to do the needful by giving our members their promotion as and when due and applying the same measures being applied to other health institutions to us.”

Contacted, the Public Relations Officer of LUTH, Mr. Kelechi Otuneme, told the News Agency of Nigeria (NAN) that the management had not reacted yet on the development.

NAN also reports that few nurses were seen attending to some patients, while others joined the protest.
Nigerian Nurses lighting up the world one candle at a time.
Top

For clarity, let me inform you that the terminal grade level for nurses without first degree is CONHESS 13,. Nurses with RN/RM were promoted to this level at all other teaching hospitals except LUTH. BNSc holders are the only one that can get to CONHESS 14&15.

The question is why must LUTH management stagnate them on CONCHES 12 when other teaching hospitals around promoted the same category to 13. So don't see the struggle as against advanced Nursing education.

Join us in this struggle. Solidarity for ever!

Luth is not against BNSc, most nurses are in one school or the other, but they are advocating those senior ones that are at the topmost end of carrier and have spent many years on level 12 should be promoted so that they can retire in peace, there after the BNSC rule should be applied.

This is what they did in other hospitals, luth should not be an exception. When workers are happy , they work better.

Okpanachi Enape
The real issue here. Now if level 13 is ADNS then the highest level you can attain with your BNSC is level 15. Meaning you will be inferior to other directors. Some of us are just too happy to understand the implications of these rash decision called policy. Divide and rule will continue to be their greatest weapon. So let not those BNSC think it is a favor

At the Family Medicine Department of the hospital, many patients were seen on queues with just few consultants attending to them, as some relatives of patients complained of unavailability of bed at the Accident and Emergency Unit.
Top

Kudos to LUTH Nurses for their commitment to the struggle. Do not allow any intimidation to deter you. By the special grace of God we shall succeed.

No retreat, no surrender! This struggle is now or never again.

God bless you all.

Return to “Nurse to Nurse Discussion”

Users browsing this forum: No registered users and 48 guests