Forum rules
The information contained on this web site is for information purposes and is not intended to treat, diagnose, cure or prevent any disease.
Post Reply
First unread post • 4 posts • Page 1 of 1

She was rushed in to the accident and emergency breathless. She had been bleeding pv for some days now and was getting weaker and weaker. She was sure she saw her periods the previous month, no the period was different in length and volume and no she didn't think she was pregnant. How wrong she was! She was carrying the world's most dangerous pregnancy.

Like a parasite, her fetus had chosen to to grow in her fallopian tube, not her womb. Of course he would not survive but he won't go down silently. Poor he. It is not his fault however. Previous infections, STIs or fibroids have made the journey too hellish and the path too long. It would chose to relax here, like the weary traveller that collapses on seeing home

What are the symptoms to an Ectopic pregnancy?
Lower abdominal pains: This happens as the fetus grows, stretching the nerves in the area. This pain would worsen and becone generalized when the fetus grows into a blood vessel, causing internal bleeding

Bleeding pv:Even though the fetus is not growing in the womb, it stimulates some bleeding from there. Notice though that this bleeding is different from a normal period and is usually slight and continous.

Absent menses: This makes sense as you shouldn't see your period while pregnant

How do I know if my pregnancy is/ is not Ectopic?

An ultrasound scan would usually detect the abnormally situated fetus with an empty uterus. Note though that the scan may not pick up an ectopic pregnancy till around 5 weeks. So if symptoms of abdominal pains continue despite an early normal scan, the scan should be repeated after 2 weeks.

What is the treatment for an Ectopic pregnancy?

If detected early enough, drugs can be used to destroy the abnormally sited fetus without altering the reproductive structures
If detected late, an immediate surgery is usually necessary to cut out the fetus and the affected fallopian tube

What should I keep in mind if I have had an Ectopic Pregancy before?

Be extra careful as you are now playing a match with a red card. All future pregancies/ absent menses must be reported early to the doctor for follow up as the chance of a repeat ectopic is high. When detected early, treatment that preserves the fallopian tube can be administered. It would not do to lose both tubes.

All risky behaviors that increases the chances of STIs or pelvic infections must be avoided. All effort must be made to protect the one remaining tube like an only child.

In summary, all women of reproductive age should see the imprtance of an early scan in pregnancy. In addition to accurately giving the age of the pregnancy, it will tell if bomboy has decided to live in the passage or in the room. 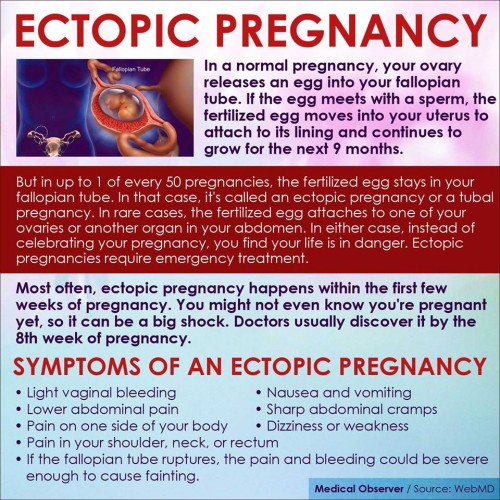 Getting Pregnant After an Ectopic Pregnancy
Most women who have an ectopic pregnancy have normal pregnancies and births in the future, even if a fallopian tube was removed. As long as you have one normally working fallopian tube, you can get pregnant. If the ectopic pregnancy was caused by a treatable illness, such as a sexually transmitted disease, getting treated for it can improve your chances of a successful pregnancy. The infection is not what caused the ectopic – it is the scarring that occurs due to the infection. Treatment of the infection does not get rid of the damage already done.

Talk with your doctor about how long to wait after an ectopic pregnancy before trying to conceive again. Some doctors suggest waiting 3 to 6 months.

After an ectopic pregnancy, take the time you need to heal your body and mind. Above all, don't blame yourself. Counseling or pregnancy loss support groups can help you and your partner cope. Ask your doctor about groups near you.
Action is the foundamental key to all success
Top

Dr Olayinka Ogunbode, a Consultant Obstetrician and Gynaecologist at the University College Hospital (UCH), Ibadan, said on Thursday that one out of every 10 pregnancies in Nigerian hospitals ended up as an ectopic pregnancy.

Ogunbode made this disclosure in an interview with the News Agency of Nigeria (NAN) in Ibadan.

He said the exact cause of ectopic pregnancy is unknown, but fallopian tube damage is a common cause.

He noted that a fertilised egg can become caught in the damaged area of a tube and begin to grow there.

"Common causes of fallopian tube damage that may lead to an ectopic pregnancy may be smoking by women.

"Women who smoke or who used to smoke have higher risks of ectopic pregnancy although this is not common in Nigerian women.

"Smoking is thought to damage the fallopian tube's ability to remove the fertilised egg toward the uterus.

"Pelvic inflammatory diseases (PID), such as gonorrhea and Chlamydia infections are other major causes common in African women; PID can create scar tissue in the fallopian tubes," he said.

Ogunbode added that surgery done to reverse a tubal ligation or to repair a scarred or blocked tube was another major cause of ectopic pregnancy.

"First signs of an ectopic pregnancy may include (usually) vaginal bleeding which may be light or heavy, abdominal pain or pelvic pain, that may start at about six to eight weeks after a missed period.

"As the pregnancy progresses, other symptoms may develop, which may include stomach and pelvic pain which may get worse with straining or movement.

"The pain may occur sharply on one side at first and then spread to the pelvic region, with severe vaginal bleeding, dizziness, signs of shock, shoulder pain which is caused by bleeding into the abdomen,'' he said.

The consultant advised females of reproductive age to take precautionary measures by avoiding sexually transmitted diseases which may later damage their fallopian tubes.

He said surgery was the only solution in the management of ectopic pregnancies, adding that early intervention approaches can always save the life of the patients.

"When an ectopic pregnancy is located in an unruptured fallopian tube, every attempt is made to remove the pregnancy without removing or damaging the tube.

"Emergency surgery is needed for a ruptured ectopic pregnancy," he said.

Ectopic pregnancy in tube about 5 6 week.