BNSc degree of the NOUN recognized for Academic progression and employment purposes.

NMCN circular on the full recognition of NOUN Bnsc nursing program by the NUC.

Congratulations­ Nurses'
Great Nurses!!!!
Nigerian Nurses lighting up the world one candle at a time.
Top

NOUN Update:
I am 100% confirming to my fellow colleagues that a provisional accreditation has been given to Nursing department of the above institution through the help of our New NANNM National President Alhaji Abdulrafiu Adetunji Adeniji.

The meeting was held in Abuja yesterday with the NMCN registrar and NUC executive with the presence of the commission's secretary.

Congratulations Nurses'!
We are getting there!
Thanks to Tripple A may God strengthen you as you ride on.
"Changing how the world thinks about nursing".
Top

This is a Right information about health! Thanks for sharing this useful information with all of us. Keep sharing more information in the future. This really helps to us.

Aboo Sayied write:NOUN in another round of accreditation debacle with NMCN. 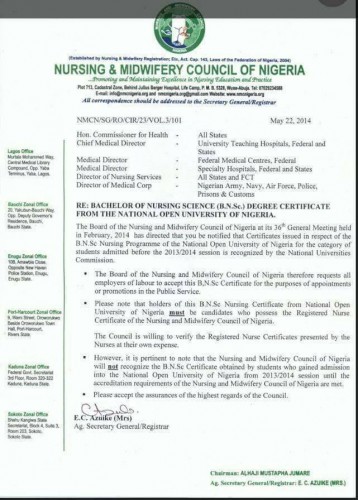 Ishioma Kennedy-Oberhiri This letter was written in 2014. Isn't there any recent one?

Deji Bobade There must have been another development after this because at a stage NOUN stopped admitting Nursing students. It only started again after they got some form of accreditation from the Council.

Prince Aremu Lucky Okikiola and read the content of the letter to comprehend. likewise seek information about how accreditation is being done and how it works


Unaegbu Gift This is outdated information even before the accreditation.why posting this now? is it to downgrade the noun graduate? what do u intend to achieve

Unaegbu Gift Noun nursing graduate are now doing their masters with their results if you don't know.

NURSING AND MIDWIFERY COUNCIL OF NIGERIA SUPPORTS ACCREDITATION OF NOUN NURSING CERTIFICATES
The NMCN says it is ready to collaborate with NOUN to ensure it is given full accreditation from the NUC billed for May this year. This was following a visit by delegates from the NMCN led by the Registra Faruk Umar Abubakar.

The NUC had given an interim accreditation to NOUN previously.

The Registrar says for the certificate from NOUN could be used for appointment, promotion and post graduate studies, also saying that the major problem is no communication between NOUN and the NMCN.

In his response, the Vice Chancellor of NOUN promised to rectify all areas raised by the Registrar
Nigerian Nurses lighting up the world one candle at a time.
Top

NMCN circular on the full recognition of NOUN Bnsc nursing program by the NUC as udated above.
Nigerian Nurses lighting up the world one candle at a time.
Top

Thank you for the update.
Top

Users browsing this forum: No registered users and 34 guests